A Piece of History - PILIPINAS

What happen in the year 1971? This year is significant to me coz it was the year that I was born. I posted in Amiable Amy that it was the year when Plaza Miranda was Bomb and series of events followed after. Ferdinand Marcos at that time is the President of the Philippines and his government was threatened by communist insurgency and civil unrest thus, the following year he proclaimed Martial Law.

During Edsa People Power, people go out and express their sentiments on the street. This is People Power and which ended peacefully. 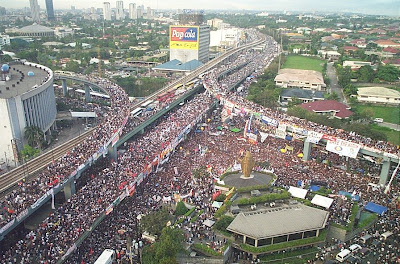 During Marcos Regime, most of the opposition leaders were put in jail and exiled including Senator Benigno Aquino Jr. In order to please the Catholic Church before the visit of Pope John Paul II, Marcos officially lifted martial law on January 17,1981. However Marcos retained much of the government's power for arrest and detention. Basically, corruption and nepotism as well as civil unrest contributed to a serious decline of the Philippine economy at that time.

1983, opposition leader Benigno "Ninoy" Aquino Jr. was assassinated at the Manila International airport upon his return to the Philippines after a long period of exile. This resulted an anger and too much dissatisfaction by the people with the Marcos regime, including pressure from the United States, that culminated in a snap presidential election in February 1986. The opposition united under Aquino's widow Corazon Aquino. The election were held on February 7, 1986

The election was marred by widespread reports of violence and tampering with results by both sides of the political fence. The official election canvasser which is the Commission on Elections (COMELEC) and NAMFREL, an accredited poll watcher declared Marcos as a winner. The allegedly fraudulent result was not accepted by Corazon Aquino and her supporters. International observers, including a U.S. delegation led by Sen.Richard G. Lugar also denounced the official results. Thus PEOPLE POWER, the peaceful civilian-military uprising forced Marcos into exile and installed Corazon Aquino as president and the first woman President of the Philippines on 25 February 1986. Marcos regime lasted for 2 decades. That's how the history unfold from the time I was born.
Thoughts by amiable amy