When we arrived Freeport Harbour, I told to myself that finally I have seen Bahamas. We were having breakfast at 6 AM at the Garden Restaurant in the Norwegian Sky Cruise Ship. We wanted to see the sunshine that is why; we were up so early and besides, we wanted to dine early too so that; we will be the first to go down the gang way. 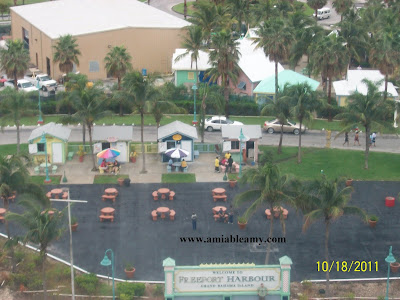 It was a cloudy day and earlier, it drizzles a little. When we finally went down, we head to the terminal just few meters away, where transportations are waiting for the tourists. All fares are written boldly on the information board so; it was very concise.

We hired a van and paid $5 per person each way. It was old but, we rode comfortably then, we routed a rugged road. There's nothing to see but, dirt road, trees and badly hit houses in ruins by hurricanes. Too bad because they are huge houses but were abandoned. We went to the Treasure Bay Casino and Market Place in Port Lucaya and bought souvenir items. Later, we look for a hotel to use their Free Wi-Fi just in time when the rain started pourin' hard. The view of the beach along Port Lucaya is awesome! We were back on the ship before 5 PM.
Thoughts by amiable amy