Walt Disney World which is located in Florida has 4 theme parks namely: Hollywood Studios, Animal Kingdom, Epcot and Magic Kingdom. Each park is enchanting and full of fairy tales with amazing entertainment, beautiful attractions, and full of adorable shops. Disney Characters will be seen anywhere in the park and most of all; the building designs and structures at Disney are truly extra ordinary. 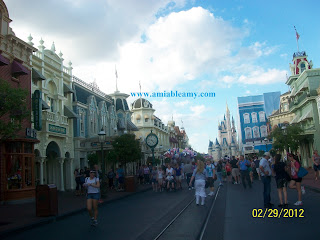 In Magic Kingdom, the iconic Cinderella Castle is located in the middle of the park. It has pathways across the 107 acres surrounding by what they described as whimsical lands: (photo above) Main Street, U.S.A., Adventureland, Frontierland, Liberty Square, New Fantasyland and Tomorrowland.


I was thinking, the minds of Walt Disney was truly amazing to fantasized all these places and make it into reality. But, wait... check this out! I am in Marceline, Missouri this week and I took all  these photos. This is the Main Street USA in Marceline, Missouri, the boyhood town of Walt Disney. It is very similar in the Main Street USA in Magic Kingdom. It has little shops, the Imporium is there, and the Movie Theater as well.

The street sign says "Main Street USA" with mickey mouse ears in it and take note of the clock here. It is all over in Magic Kingdom too. Check out the clock in the first photo above. Did you know that Main Street USA was inspired by Walt Disney's hometown in Marceline, Missouri? Now you know.
"To tell the truth, more things of importance happened to me in Marceline than have happened since - or are likely to in the future." -WALT DISNEY
Thoughts by amiable amy